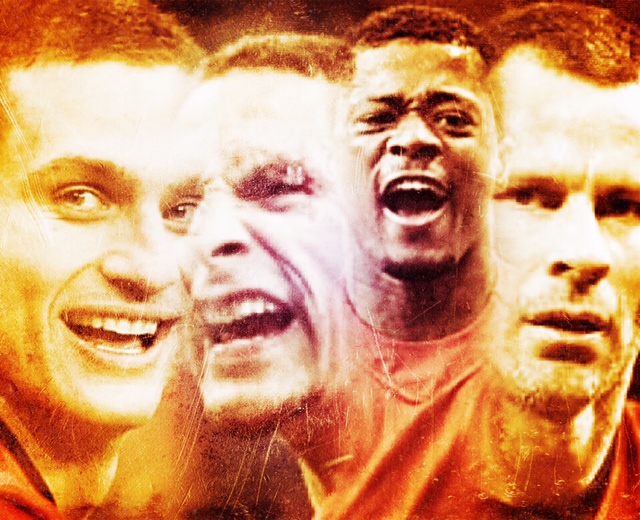 Tonight, Tuesday May 6th, looks like the night that we say goodbye to some great players.

The one certainty is that we are saying thanks and farewell to our club captain and brave leader, Nemanja Vidic, who will surely be one of the hardest players for many a year to replace. He has been a magnificent player for our club – fearless in the air and equally intimidating in the tackle, with positional sense to match anyone in the Premier League. What a bargain at £7 million! Nemanja, we wish you lots of luck and happiness at Inter – you will miss Old Trafford and the supporters, but the pasta is definitely better in Milan.

So to others that may be playing their last game in front of the great crowd at the Theatre of Dreams tonight. Realistically, these could include Rio, Patrice and of course our very own Giggsy. What can one say about these 3 great players who have helped the club win so much silverware?

No words can do justice to Giggsy – an amazing servant and a beautiful player to watch. Thank you for 23 memorable years! We all hope that you remain at the club, initially as assistant manager and then, well, who knows, but we all feel you have the qualities to be a fantastic United manager one day.

Rio – what a great player, like a pedigree race horse, elegant on and off the ball, timing his runs and tackles to perfection, and the perfect partner for Vida. Remember in the 2008 championship year, only conceding 22 goals?

Patrice – a constant threat on the left, overlapping at pace to give us extra width and create space, and playing his part in some of our most entertaining football. And there was also some terrific defending… well, at least most of the time. Our club vice captain and a true Red, who we will also greatly miss should this be his final game at Old Trafford.

As I stated at the beginning, Vida is the only certainty, but it’s likely that these other 3 will also be playing for the last time in front of their adoring fans. I am sure there could be others making a final appearance, but in truth they won’t be missed in the same way.

Good luck lads – enjoy the rest of your careers and thanks for so many amazing memories that will surely last a lifetime for both young and old supporters of the club.