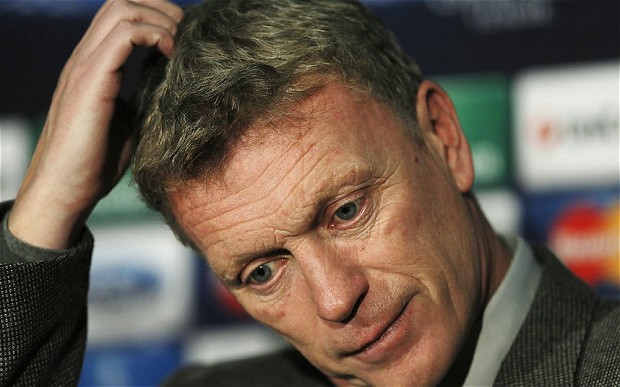 This time last week, most United fans were really excited about the signing of Juan Mata. Whilst we all knew more signings were necessary, the feeling was far more positive with Mata in the squad and Rooney and RVP available for selection again – maybe we might yet have a chance of finishing the season on a high. We all looked forward to the home game with Cardiff and, whilst we gained 3 points, the performance was only just about good enough to get the win.

After watching the game against Stoke on Saturday, then watching it again yesterday to work out exactly how we played so badly, I’m in no doubt that the manager is entirely to blame for our latest pathetic performance.

I won’t list all the records that Moyes has already broken this season, as we have already documented these well on Manchester La La La, but it’s not just the fans who suffer with every new humiliation; it’s all too clear that many of the players have been completely de- motivated by Moyes as well.

There have been consistent grumblings coming out of Carrington that the training is outdated, and more injuries are occurring during training sessions than at any time under Ferguson. At the same time, Moyes is candid about his plans for a major overhaul. As fans, we know that’s what we need, but is that really what the current players need to hear?

Whilst some feel that Moyes was right to admonish his players so publicly, I would argue that you won’t get the best out of your team by telling them they’re no good. By airing his concerns about the quality of the squad without naming any names, he has risked kicking his own boys while they’re down, with 90% of an already dejected squad now playing with even less confidence than before.

Fergie built a team of winners, buoyed by an unshakeable belief in themselves and their boss; now we’re looking at a team that no longer plays like greatness is their destiny. Without that total, almost subconscious sense of being the best, without that cocky sense of entitlement that our rivals hate so much, it’s like the soul has been sucked out of the club. In 26 years, we never heard Ferguson talk like Moyes has these last few months.

A big problem for me on Saturday was the tactics. They were completely wrong; it was obvious to everyone except the man in charge. Firstly, playing Juan Mata wide on the right is a complete waste of £37.5 million – he is a number 10, end of story, and if he wasn’t bought to play that role, why did we even bother? He is a great player and can have a huge influence at United, but only if he is played in his best position.

Things only got worse when Moyes was forced to make some changes on the fly. His decision to leave Fletcher on the bench was baffling, especially when it meant moving Carrick to centre-back, and expecting Rooney to control the midfield after weeks without a game was simply schoolboy stuff.

But we really should have seen this coming – the writing was on the wall as soon as Moyes signed Fellaini, a player that can certainly cause problems, but who is clearly incompatible with United’s style of football. Where did Moyes think he would play for United? If we let him go, which we absolutely should, it’s hard to see us recouping £12 million for our 6ft 4in misfit.

Mata could yet prove to be a great buy, but only if he’s allowed to do what he does best. Without a tactically astute manager, though, it’s hard to see how our new number 8 can really thrive.

2. Does Moyes watch a different game to the rest of us, trying to tell us we played well, were the better side, and were just unlucky? His measure of success seems to be how many times we get to the byline, even though the only goal against Stoke came from playing through the middle.

3. Are Cleverley and Welbeck good enough? Whilst we all love to see local lads come through the system and make it in the first team, are these two boys really good enough to help put trophies in the cabinet? They are no longer kids; they have been around a few seasons, but just don’t seem to be at the level required to help Manchester United seriously challenge the very top teams.

4. Why didn’t Januzaj replace Ashley Young? Adnan is arguably our best player so far this season, and whilst I accept he may need a break to avoid burnout, surely he could have made the difference on Saturday.

Most of us accepted there was little to no chance of silverware this season, but a top 4 finish should have been a minimum. That’s very unlikely to happen now, and the blame must surely be with Mr Moyes. I find it virtually impossible to imagine a return to the glory days under his stewardship, and the longer he remains in charge, the more complete our transition to mid-table mediocrity will become; we will eventually be reimagined as the Everton of M16.

We know Moyes was Ferguson’s choice, but surely Sir Alex must accept that he got this one wrong. Hopefully his love for United is bigger than his ego, and he will advise the owners to change things in May to ensure our future success.

Personally I would love to see Diego Simeone given the opportunity to manage the greatest football club in the world. Who would you choose to replace Moyes? Share your comments below.