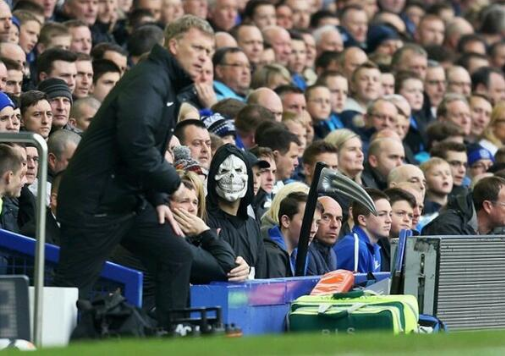 After another pathetic display against Everton – surely that must be it for Moyes?

He said he thought we played well, controlled the game and passed the ball brilliantly. That may be true, but We never really ever got close to the Everton goal until the last couple of minutes when old boy Tim made a good save from Rooney. OK, so we played some tippy tappy football but that got us absolutely nowhere, with no movement or pace off the ball. Everton were very capable of dealing with Moyes’ tactics. On the contrary, every time Everton went forward they looked dangerous, and could have scored at least 2 or 3 more goals. If the score had in fact been 4-0, it would not have flattered the lads from Goodison.

Games like this are making United unbearable to watch, and listening to Moyes is even worse. Surely the Glazers won’t allow him to spend millions and fail again next season? Everton had not done the double over us for 44 years – not only did they do the double but we failed to score against them home or away, just like Liverpool, Chelsea and City. We have just scored the ONE goal against the top 5 this season, against Arsenal at home.

Many think Moyes overachieved at Everton during his 11 trophyless years there, but now looking at both United and Everton, it’s starting to look like the opposite is true. I go on about his purchase of Fellaini, but let’s face it, if he can’t get in this United team (that Moyes has openly criticised) then why on Earth did he buy him, and how could he possibly be trusted with further funds?

The Everton players have been very vocal recently about Moyes, on THE one hand giving him praise for his reign at Everton, but on the other saying how different and much more positive it is under Martinez. The reality is many of the players there didn’t know any better until Martinez came along, and have now witnessed a completely different philosophy, which, as everyone can see, is greatly benefiting the club. In the meantime United are a shambles, a team lacking in any confidence or ideas and playing the game the only way Moyes knows how.

He absolutely has to go. We cannot take any more of this, and if he is still there come July / August, we can all look forward to another disappointing season.

I wholeheartedly believe that if David Moyes, with his CV, had been anything but a Scot, Fergie would never have offered him the job. This is a classic example of “old boys” mentality backfiring.