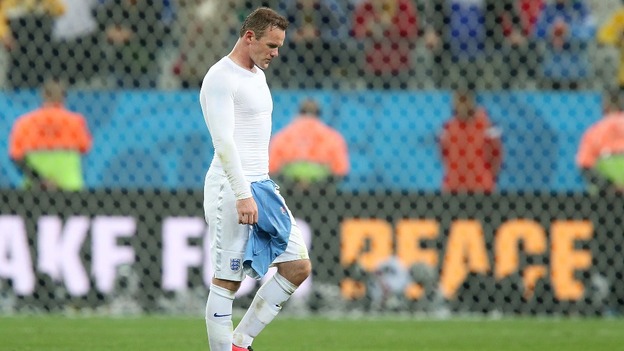 Well it wasn’t exactly edge of your seat stuff in Sao Paolo on Thursday, watching England labour through another defeat.

It kind of angers me reading the Daily Mail and other Rooney-bashing papers, seeing Wayne once again taking the blame for England’s underperformance.

Admittedly, Rooney wasn’t great. He is a very good player, but he isn’t on the same level as Ronaldo, Suarez, Messi or RVP. He should have easily scored a brace against Uruguay – if any of the world-class finishers I mentioned had those chances, they would most likely have been taking home the match ball. However, at least Rooney got into the positions to score, which is more than you can say for any other Englishman on the pitch. Let’s be honest, it was altogether pretty poor, with no midfield yet again, and never any sense of controlling the game. In a nutshell, it was the same old England.

How many times have we heard we have a new generation of players and maybe next time we will do better? I think we need to remember that over the past 15 -20 years, England has had some of the best players it has produced in a long, long time – Gerrard, Lampard, Scholes, Beckham, Shearer, Sheringham, Gary Neville, Rio Ferdinand, Rooney, Terry, Cole etc. But once they pull that England shirt on, they are completely different players.

England could come home winless, and despite their terrific club seasons, the Liverpool contingent have hardly helped our cause. Gerrard and Johnson had 2 very poor games, Sterling was basically useless against Uruguay, Henderson is Henderson (I definitely wouldn’t want him at United), and Sturridge left his legs in Manaus. As far as our boys were concerned, I genuinely thought Wazza was our best player on Thursday, but Welbeck was absolutely useless. The rest are barely worth a mention – poor at best, and the only defender that looked like he belonged in an England shirt was Cahill. If Hodgson had the bottle to have taken a very poor Gerard off at half time, maybe, just maybe, England would have got a better result, as the captain was easily the worst player on the pitch.

So, with England out, attentions naturally turn back to United. It will be so interesting to see what Louis does, as I just can’t imagine him sticking with some of the English lads that are just not technical enough for his style of football – the likes of Smalling, Young, Welbeck, Jones and maybe even Rooney. I can’t wait for Ed Woodward to come out of hibernation and start doing some transfer business, selling the crap and buying some real quality so Louis can work his magic. You can see RVP looks like a new player – if he can keep this form going, then roll on next season!

I don’t know about you, but if Woodward pulls his finger out, I think we can look forward to a very exciting campaign.