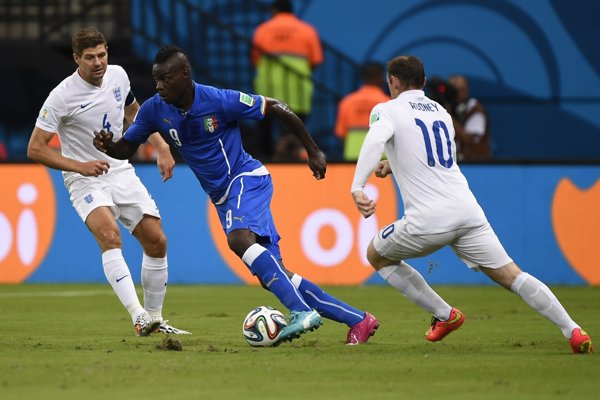 England’s opening game of the 2014 World Cup ended in a 2-1 defeat to Italy last night in Manaus.

Many so-called experts are claiming this was a good performance by England, and I have read that Gerrard was proud of the great display by his England team. I guess my mates and I were watching a different channel. I question what Gerrard was so proud of. Losing?! That’s the English mentality, and explains why we never ever win anything – getting close is good enough. This is just bullshit; can you imagine if that was Man United v Inter Milan with the same result, with the likes of Fergie and Keano echoing the post-game assessments of Hodgson and Gerrard? It wouldn’t happen.

Without doubt, it was good to see Sterling and Sturridge, even though they play for the enemy, as they were realistically the only 2 players that looked like causing a very average Italian team any trouble at all. Welbeck had the odd flash that suggested he may be worth a place in a Premier League team, but the other 7 outfield players were barely worth a mention. Baines carried on his poor Everton form and has to take most of the blame for the 2nd goal, having been nowhere near his man, who was then able to pick his spot for Balotelli to head in the winner.

England struggled to put 2 passes together and continued to try and shoot from 25 yards, causing the Italians little trouble. Italy completely controlled the tempo of the game, and in the humid conditions, they barely broke a sweat to beat an England team that was average at best.
Whilst I agree we have some decent young players coming through – the likes of Barkley, Shaw, Lallana, Sterling and Sturridge – players like Rooney are seriously looking past their sell by date, and how I bet Louis Van Gaal was wishing United had sold him to Chelsea last year rather than have him on the books at £300,000 a week. I just cannot see where Rooney will fit in with the way Van Gaal will want United to play.

So to the Netherlands – that was a pure masterclass by manager and players, so very different to England, and to the United of last season.

I believe Friday left United fans around the world dreaming again of what can be over the next few years under Louis. Let’s hope Woodward comes out of hibernation and does what Van Gaal needs in the transfer market these next few weeks, or surely he will be joining Moyes looking for employment .

I can’t wait for Louis and Giggsy to get started – exciting times ahead, certainly far more exciting than watching a poor England side fail again.