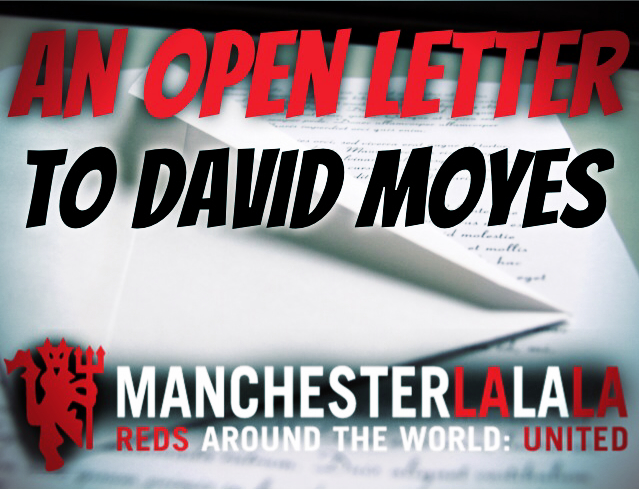 Congratulations on another major achievement. We are now in the worst position at this point in a season compared with our cross-town enemy for 77 years. Not since 1937, before the last World War, have we been so many points behind City.

Congratulations on your groundbreaking tactics for the derby. Cleverley on the right wing – genius. Fellaini and Carrick in no particular position – always going to get the better of Toure, Fernandinho and Silva. I guess, yet again, we were just unlucky.

Congratulations on writing a brand new script. I heard you say City are what you now aspire to – oh how things have changed in 7 months. The Scousers come to Old Trafford as favourites, and City are the team we hope to emulate. Busby must be turning in his grave.

Congratulations on somehow bagging the biggest job in football. I can only guess that you promised Ferguson 80% of your salary, as otherwise, it seems impossible that you would have got this job. Unless of course Ferguson is actually Walter White in real life, and you are the only one that knows. Bobby Charlton must be Mike – we really need Hank to bust the lot of you and throw you all in the conference for the next 30 years.

Congratulations on continuing your Everton run without missing a beat. Everton have really missed you, and should Martinez fluke his way to 4th place at the first attempt, I am sure Bill Kenwright will come begging you to come back and lead them to Champions League glory.

Congratulations on your incredible record against the top teams. At least we have managed to score 1 goal at home this season against the top 5, and taken 4 points at Old Trafford from a possible 18 against the top 6. That is some going for a new manager taking over the champions of England. Even better, the one goal we scored was against the amazing Gooners, who have only conceded 17 goals in 3 away games to City, Chelsea and Liverpool. Also, just a little side note, but we have failed to score a single goal away from home against the top 4, and that will probably extend to the top 5 when we inevitably lose to Everton.

Congratulations, too, on collecting 7 points from a possible 39 so far from the top 9 clubs in the league. Bring on Bayern, I am sure you have it all tactically figured out so they don’t get into double figures next week.

Congratulations on clinging on. In most professions, you would have been shown the door months ago. For some reason, the industry you are in allows managers to waste hundreds of millions, run a company into the ground and get paid off handsomely for doing so.

Seriously though David, please just do us all a big favour and resign. Take your second-rate backroom staff with you, and make sure you save a space for Fellaini. Nottingham Forest have a vacancy – I think you would fit in very well there.

PLEASE GO NOW. The red half of Manchester will not have celebrated so much since 1999.