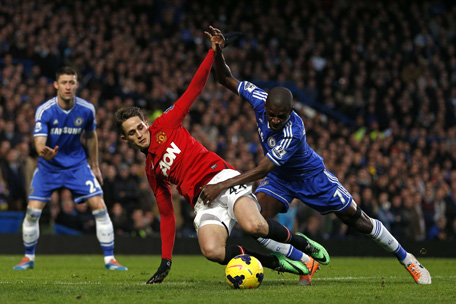 I’ve not exactly been looking forward to watching United play lately, but I was excited about today’s game. I convinced myself that the quality of the opposition would motivate us to play our very best football. I thought a draw was realistic, and a win not totally out of the question, but in the end, despite a bright start and 70% of the ball in the opening 10 minutes, we did nothing to dispel the impression that United are going backwards under Moyes.

Chelsea’s first goal came against the run of play, and there was little De Gea could do about the massive deflection Eto’o’s long-distance shot took off Carricks’s boot, but Jones should have done a better job of containing the Cameroonian.

Eto’o’s second goal came just before half-time, and with Mourinho’s notorious ability to kill a game and frustrate the opposition, it was hard to see a way back, even with 45 minutes left to play.

When he completed his hat-trick 4 minutes after the break, it was obvious the game was over. Sure, we came back from 3-0 down at the Bridge back in 2012, but I just couldn’t see the current Man Utd team pulling off anything like that.

When Hernandez scored a tap-in with 10 minutes to play, it still felt like we’d resigned ourselves to heading back to Manchester without any points, when Chelsea should have had their backs firmly against the wall.

Jones: The Next John O’Shea?

Jones didn’t look comfortable in central midfield today – he failed to cut off Chelsea’s attacks and offered no creativity going forward. We need to play him in his natural position, instead of turning him into the next John O’Shea. His performance was yet another reminder of the glaring need for at least one top-quality CM. Cabaye would be a good start, but I’m worried Moyes will just plod on till the summer with what we’ve got, at which point we’ll probably watch the likes of Gundogan frustratingly join other, more exciting clubs, despite months of rumours to the contrary. Then we’ll most likely end up signing Ross Barkley for £60 million instead.

The defence was once again shambolic today, culminating in a straight red for Vidic to round things off. Our vulnerability on the counter and at set-pieces is painful to watch, and it’s clearly affecting De Gea’s confidence to see such disorganisation in front of him. His kicking has been dodgy in the last few games, and he’s clearly crying out for a stable centre-back partnership to help him protect his goal.

Predictable and Toothless in the Final Third

Going forward, there was a total lack of belief. Janujaz was, again, the only player who looked like making some magic happen, but despite some great work from Adnan, and several good balls into the box, there was no-one to finish the moves, and no-one getting to the second balls when the attacks broke down.

Overall, we created nowhere near enough chances considering we had 56% possession, and when we did get in shooting positions, we simply weren’t clinical. RVP had a chance conversion rate of 18% last season, and only Suarez had more shots on target. In terms of goals-per-match, RVP got 0.68, compared to 0.7 for Suarez. This season, Suarez is up to 1.29 goals-per-game, and Van Persie is down to 0.64. Without Van Persie fit, we don’t have a truly clinical striker capable of winning matches for us. Rooney is our next best goalscorer, but he continues to play exceptionally deep, which means he’ll never get the return he’s obviously capable of. Welbeck is certainly improving, but still has some way to go.

What Needs to Change?

Right now, we look like we need world-class reinforcements at CB, CM and CF, and we either need to give Zaha a chance or bring in better competition for the generally woeful Valencia and Young. Once we have the right personnel, we need to play a more intense, high-pressing game with a more nuanced range of attacking ideas than randomly pinging balls into the box from the wings. And we need to get to grips with defending against counter-attacks and set pieces to give ourselves any hope of getting the results we need.

The questions about Moyes’ suitability won’t go away until our play improves and the results get better. He’s got an incredibly tough journey ahead of him – like most Reds, I’m desperate for him to do well, but the signs so far suggest that this might simply be too big a job for a man with no history of winning trophies and not enough charisma to paper over the cracks in his CV. It still feels like Moyes made a massive mistake sacking all Fergie’s backroom team – Pellegrini, Mourinho and Guardiola avoided similar clear-outs, and look at how well their clubs are doing.

Fergie’s departure was truly the end of an era, but perhaps we’re still stuck in the past with the old gaffer still wielding an unclear amount of influence, and the likes of Bobby Charlton potentially holding the club back by clinging to tradition at the expense of progress. Obviously, our history is what makes us great, but nostalgia and stubborn continuity won’t win us another 20 championships. The football world has changed, and as noble as it might seem to stay patient and play the long game, our failure to evolve could end up haunting us for the next 2 decades or more.

If we finish outside the top 4 this year, maybe the Glazers will decide it’s time for more radical change. Could it be time to bring in Cortese as chairman and let Simeone show us what he can do as manager of Man Utd? Such a drastic overhaul might sound unappealing, or just plain fantasy, to some, but if the alternative is to continue feebly regressing like we are right now, and risking a generation of football obscurity, we surely don’t have a choice.