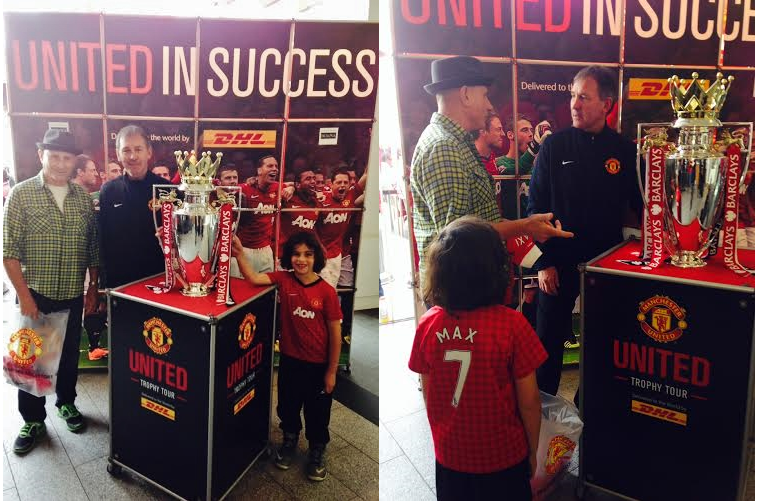 My son and I arrived yesterday afternoon at the Westfield Mall in Century City, Los Angeles, about 1 hour before the trophy and Bryan Robson were to be introduced to United fans. I figured there would most likely be a small turnout, on a Friday afternoon at 1.30pm, with most kids in school and most adults at work. How easy it is to forget the power of Manchester United. I would estimate, when I arrived with my 6 year old son, there were at least 2,000 fans decked out in replica kits, waving banners and singing songs. It was like being on Sir Matt Busby Way before a match on a sunny Spring Saturday afternoon, only I was in the Mancunian minority.

I quickly got in the line, and then waited more than 2 hours to get to the front to see one of our legends, and of course the trophy that we all feel belongs permanently at Old Trafford .
Robbo was brilliant – he shook my son’s hand, asked him his name and his age, and took the time to chat with us after meeting fans for a couple of hours already, and with probably 2 more to go before he headed off to the Hollywood sign for more photo opportunities with fans that couldn’t get the time off on a Friday afternoon.

I wish he was 25 years younger, as he is exactly the player we are crying out for right now. But do they still make them like Robbo or Keano? I am not so sure.

As fans mingled, there were lively discussions about the state of the team. Whilst I sensed everyone wants Moyes to succeed, the overwhelming feeling was that he was the wrong choice, and fans seem genuinely concerned about what will happen in the summer.

One gentleman said to me: “It’s not the winning or the losing – it’s the way we now play.” This particular man was from Armenia, and he told me that a few weeks ago his wife said to him: “You have lost your coach, the best players are too old, the team has become very poor. Why don’t you support another team?” He told her in no uncertain terms that he will never stop supporting United whatever happens to them, and let’s hope that holds true for the majority of our 600 million fans around the world. Make no mistake – we play a huge role in the success of this great club. Without our loyal support and appetite for Man Utd merchandise, the sponsorships would dry up, the income to the club would diminish, and the team would be on a serious downward spiral.

So all you Reds out there, remember that blips are temporary and class is permanent. Whether it’s with Moyes or without him, United will be back sooner rather than later.