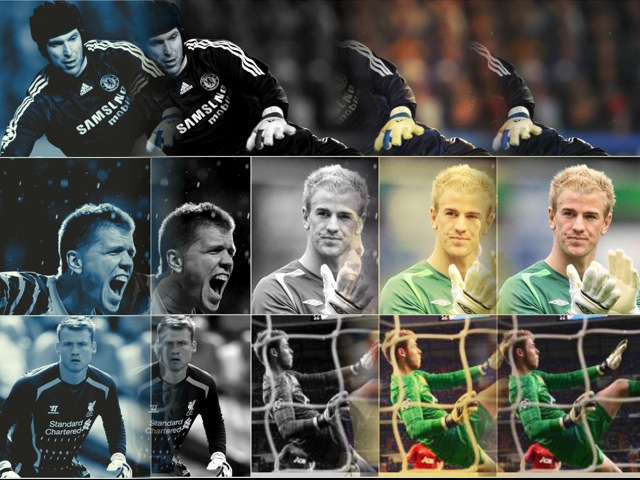 After Lindergaard’s excellent performance at St James’ Park yesterday, standing in for the ever-improving De Gea, I decided to take an in-depth look at this season’s top-performing Premier League keepers.

The 5 charts below are based on keepers who have played 10 games or more this season. Original data was taken from TheScore.com and Squawka, and organised / presented using Google Fusion Tables.

Petr Cech leads the way with 15 cleansheets this season, followed by Szczesny and Lloris. De Gea has managed 1 more cleansheet than both Hart and Mignolet so far.

In terms of cleansheets per game, Petr Cech comes out on top again – his 15 cleansheets in 33 appearances gives him a ratio of 0.45 per game. Based on this metric, Jaaskelainen and Boruc both come off pretty well, whilst De Gea is languishing in 10th place.

Goals conceded per game tells a slightly different story again, but its Cech once more that sets the standard, with an average of 0.73 goals conceded per game. Joe Hart and Tim Howard are the next best keepers based on this measurement, whilst De Gea comes out 9th. Mignolet has conceded more goals per game than his Man Utd counterpart, which just confirms how Liverpool have relied on their free-scoring forwards to make up for their defensive weaknesses this season.

Goals conceded per minute played paints a pretty similar picture, with the top 3 of Cech, Hart and Howard staying the same.

In many ways, this is the most revealing chart, showing which keepers have the best shots / saves ratio. Sunderland’s Vito Mannone tops the table, having saved 76% of all shots faced (81 saves from a total of 107 shots). West Ham’s Adrian has the next best shot-stopping record, at 74% (52 saves from 70 shots), while Tim Howard has registered a very respectable 72% save rate (76 saves from 105 shots). Cech is the only other top-4 keeper to make it into the top 5 in the shot-stopping department (67%), while De Gea has kept out 65% of all shots faced.

In terms of distribution, the keepers at the current top 4 teams are ranked as follows:

By comparison, De Gea has averaged a distribution success rate of 62% this season.

Whilst the stats never tell the full story – they don’t tell you how important the back four were in making all those cleansheets possible, or about those really special saves that keep teams in games – they do give a good overview as we approach the end of the 2013/14 season.

At 31 years of age, Petr Cech is in his prime, and whilst Mourinho’s tactics certainly work in his favour, it’s hard to argue against him being the best keeper in the league.

Hart and Mignolet are both 26, and it’s unclear how much either of them will improve from here, but they are also both clearly very capable keepers.

It’s really Arsenal and United fans who should be the most excited though – Szczesny and De Gea are both just 23 and already first-choice keepers in the Premier League – probably the toughest place to earn your stripes in goal.

There are also plenty of other supporters who should be grateful for the quality of their keepers, with the likes of Southampton’s Artur Boruc, Everton’s Tim Howard and West Ham’s Adrian all looking like key players for their teams.

As a United fan, I’m excited to see De Gea’s development continue, and hope he’ll still be protecting our goal in 15 years’ time. Hopefully, with a settled back four in front of him, the cleansheets will increase. I’d also like to see his distribution improve – Szczesny’s 69% success rate is the kind of level he should be managing – but it’s the moments like the amazing double save against Olympiacos that really prove his worth.

Do you agree that Cech is the Premier League’s best goalkeeper right now? Let us know in the comments below!

2 thoughts on “Who Has Been the Best Goalkeeper of the 2013/14 Premier League Season?”