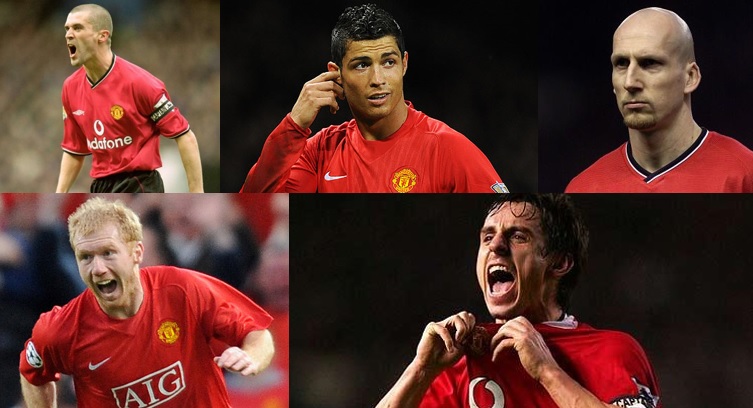 At times like this, we can all take comfort in memories of our illustrious past. Everybody loves a big old dose of nostalgia, and with Manchester United, there is plenty to look back on.

Before you know it, you can find yourself three unproductive hours later, having just watched every goal Dwight Yorke ever scored for us, every interception Jaap Stam ever made, every super-save from the Great Dane, and everyone’s favourite – the countless number of last minute winners. Although I would argue that lounging about on YouTube reliving these glorious moments is a perfectly acceptable use of time, some may beg to differ.

My sheer levels of procrastination have got me thinking – if we were to have one ex-player, from say the last twenty years, to inject a bit of much-needed drive into our team, then who would it be? I have narrowed it down to a shortlist of 5…

Teams across the land quivered at the thought of facing up against this rabid Irishman. The thought of being on the end of a steely-eyed stare from Keane is enough to make a grown man cry. His leadership, urgency, desire, passion and drive is something that we could really do with right now.

Nothing really needs to be said about this one – the Ballon d’Or winner, the greatest player I have ever seen live, and, in my eyes, the complete footballer. However, I feel Ronaldo is too much of an obvious choice – based on our current situation and the positions we’re so short in, I am not going to go for Ronaldo.

A man with similar traits to Kean, Stam was afraid of no one, and would never disappoint on the pitch. The fact that Ferguson openly admits that he was wrong to sell Stam is testament to his ability, as let’s face it, Ferguson isn’t exactly one to acknowledge a mistake that he has made. Without doubt, Stam would sure up what’s been an alarmingly shaky defence of late.

There is nothing more beautiful in football than seeing Scholes slide in with a horrendously mistimed tackle, or do I mean seeing Scholes effortlessly spray a cross-field pass 60 yards? I just get so much joy from both. Scholes would be sure to inject a bit of creativity into our team. You just need to look at what fellow professionals say about him to realise how special he was.

A right back that can put in a good cross? What more needs to be said? A leader on and off the pitch, and an invaluable member of the squad. Neville would be sure to inject a bit of much-needed leadership and discipline into the team, and would also add some defensive solidity.

As hard as it is to not pick Ronaldo, for obvious reasons I am going to have to go with Roy Keane. He is just the player we are crying out for at the moment, and the type of commanding leader that could change any team. He had an air of invincibility which transcended the team.

If I had Roy as a teammate, not only would I look up to him as a leader, it would give me confidence to raise my game, and I would always be certain that we would win. Right now, that leadership, confidence and belief is desperately lacking, and that is why my fantasy pick of an ex-player from the last 20 years to be magically parachuted into the team is the one and only Keano.

One thought on “If You Could Put One Ex-Player Into the Team, Who Would it Be?”