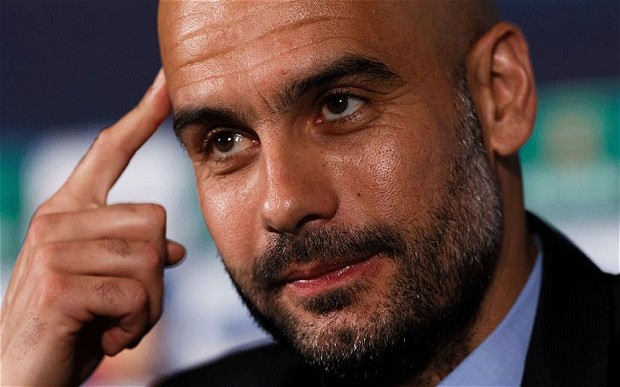 I watched the Bayern v Arsenal game on Tuesday, and really could not believe the huge difference in the quality of the 2 teams. Bayern didn’t get out of second gear; they didn’t need to, and made it look so easy against a very average Arsenal side.

I seriously cannot name one Arsenal player that would start for Bayern, and that includes the overpriced and overrated Ozil, who strolled around like he was walking his dog in Hyde Park.

So whilst Pep undoubtedly inherited a very good team, he has without question made them even better. They look like Barca did when they were playing the “beautiful game”. They actually play the game very simply – they defend from the front, they give the opposing defenders and midfield players no time on the ball, and therefore play 90% of the game in the opposition half. They always seem to have a player free to pass to, which allows them to move the ball around at pace until one of these outstanding players finds that killer pass to open up the opposing defence.

Yes, of course they have some fantastic players, but this is where motivation and coaching comes into play, and Pep proved he was one of the best whilst at Barca. Now, once again, he is proving he is perhaps the best manager in world football.

I am not suggesting that we could have realistically got Guardiola instead of Moyes, but with Ferguson now admitting he had decided to retire in December 2012, did we even make an effort to get Pep, or did SAF seriously think Moyes would be a better choice? I don’t know about you, but I want to see my team play in that way – the Barca / Bayern / Atletico / Real way. I don’t want to see my team play predictable and boring football, going to places like Olympiacos and aiming for a 0-0 or a 1-0 victory, when these teams would go there looking to basically win the tie in the first leg, just like Bayern did at one of our supposed better teams.

It seriously scares me to think that Moyes may be given a ton of cash to spend. He may buy some good players, but where will our coaching and tactics take us? What will our style of football be with Moyes at the helm? Of course I want United to win trophies, but I also want to win in some style. The game has moved on so much, and that is the most likely reason Ferguson got out. He is no fool, and he was no longer going to be able to compete with the new crop of top younger coaches / managers across Europe. I’m talking Pep, Simeone, Klopp, Mourinho, Conte, Ancelotti, and I really hate to say this, but based on this season – Brendan Rodgers!

Why Moyes? I cannot understand for one second why Ferguson and the owners thought Moyes would be the man to compete with these great coaches / tacticians.

Of course, as a fan I want us to put 12 past Liverpool, 10 past Olympiacos, and 6 past City this month, but my head says maybe we’re better off getting hammered in all 3 games.

I can only hope that, if that does happen, the owners will realize that Moyes is not the man for us. So, for the long term, I would take 3 heavy defeats this month, and bring in Klopp or Simeone – end of story.