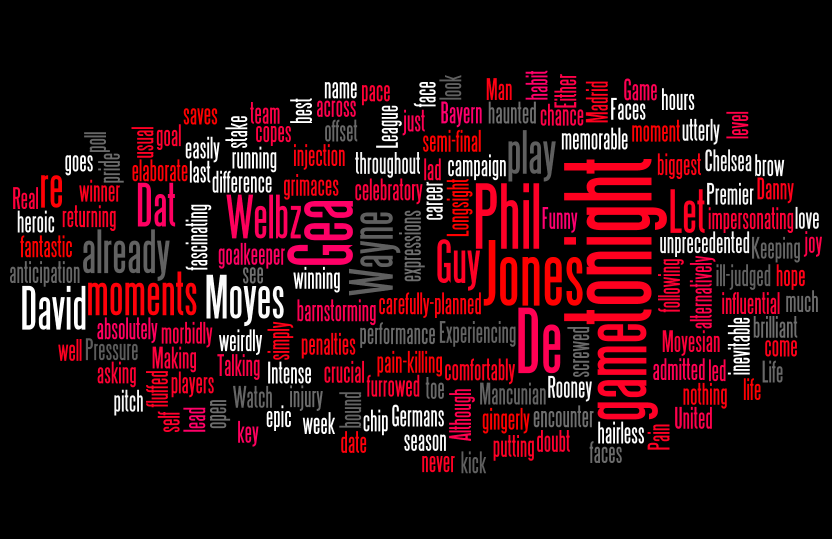 In a matter of hours, Bayern and Man Utd will kick off in Munich, with the winner through to a semi-final against Chelsea or Real Madrid.

In anticipation of this epic encounter, here are 5 things to look out for tonight…

1. David Moyes Experiencing the Most Intense Pressure of His Life

Moyes has already admitted tonight’s game will be the biggest of his career to date – he’s simply never led a team out for a game with this much at stake.

The cameras will no doubt be returning to his furrowed (and weirdly hairless) brow throughout the game, and it will be morbidly fascinating to see how he copes with this unprecedented level of pressure.

2. Wayne Rooney Playing Through the Pain

So Wayne’s had a pain-killing injection to allow him to play following his recent toe injury. Either that, or he’s absolutely fine, and this has all been an elaborate Moyesian mind-game. Watch out for him gingerly impersonating his usual barnstorming self, or, alternatively, putting in the carefully-planned performance of his life.

3. David De Gea Keeping Us in the Game

We’re currently running a poll asking fans from across the Premier League to name this season’s best goalkeeper, and De Gea is comfortably in the lead. He’s already had some heroic moments during this campaign, and he has a habit of making implausibly brilliant saves at the most crucial moments. Let’s face it – if this goes to penalties, against the Germans, with Phil Jones on the pitch, we’re screwed, but in open play, De Gea could be the difference.

Talking of Jones, there are bound to be some more memorable faces from Phil tonight. Let’s just hope that the inevitable haunted grimaces are offset by some celebratory expressions of Jonesy joy.

As we all know, Welbz is Dat Guy. Although he fluffed a fantastic chance last week with that utterly ill-judged chip, he was easily one of our most influential players, and his energy, pace and Mancunian pride could well be key for United tonight. I’d love nothing more than a winning goal from our Longsight lad – come on Danny, this is your moment!