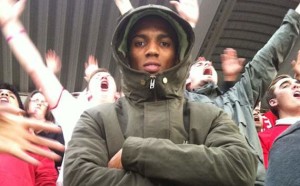 After a blistery first half that was eventually stalled by Mark Plattenberg as the hail blizzards across the Potteries, the game continued albeit eight minutes later when the deluge had subsided.

The game itself was not a classic, too many poor passes by both teams, maybe each did not compensate for the blustery winds that swirled around the ground. However, kudos to the reputed five thousand United fans who sang and danced throughout the whole storm.

Ashley Young, although could not compensate his passes or corners against the heavy winds in the first half, made up for it with a Tornado of a shot just outside the area after being unintentionally set up by Hernandez who seemed to be readying himself to turn and shoot.

The second goal was also a classic from Patrice Evra, who took a fine inside pass from Young on the left and jinxed his way into the area to unleash a beautiful right foot shot that curled perfectly into the right hand corner of the goal.

Cleverly played well again and Jones got stuck in but the errant passes were too many and needs to be addressed. Valencia and Rafael again played well together and Smalling and Evans were steady and protective of De Gea’s rarely troubled goal.

A decent result in bad conditions and United seem to be gaining in confidence with each game. Onwards and upwards please and more of the same. Just in, We have Sunderland in the semi final, could it be a Manchester Derby for the final!