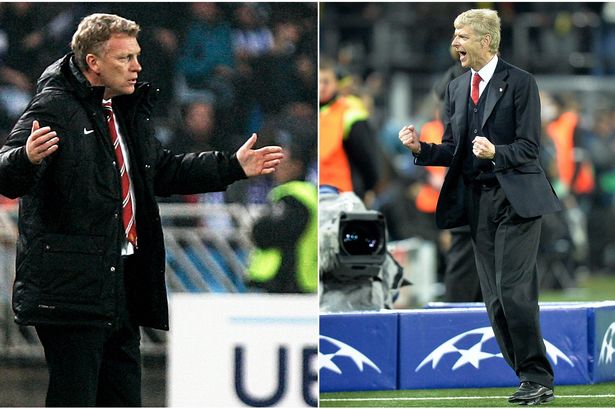 After a disappointing result and a Conference-style performance against a West London team last Sunday at Old Trafford, we now travel to North London to face our old foe, Arsenal.

Gone are the epic battles of the 90s – those fiercely fought clashes where old rivalries ran deep. The days of Fergie v Wenger and Keane v Viera were brilliant times that will live long in the memory, but we’re unlikely to experience anything like that again.

Today, both teams arguably lack leaders both on and off the pitch, and that warlike mentality the once defined this fixture is something we’re having to learn to live without.

I am sure I’m not alone in wishing we had Sir Alex leading us into battle tomorrow night. I also wish we had a real leader out on the pitch. Rooney’s energy and commitment is second to none, but is he the kind of player who can inspire the other 10 men around him to be their absolute best?

Unfortunately, we go into this game in pretty depressing form. Our manager keeps blaming bad luck, always astonished when another blitz of aimless crosses fails to result in a glut of goals. We go to the Emirates with a manager that has never won a game there. In fact, he has never won an away game against any top 4 club throughout his managerial career. Apparently, we thought that was a record worthy of managing Man United and leading our club to glory.

David Moyes is undoubtedly a nice guy. So was another David who managed United – Dave Sexton. He came to United known as an expert tactician and coach, but soon found out that this was the biggest job in football. Before long, it broke him, and it’s looking like we’re heading that way again.

I have criticized the appointment of DM from day one. I have never believed he was the right choice for this huge position. Like any United fan, I would love to be proven wrong, but I just can’t see it happening. If, by some miracle, he does turn things round and lead us to success, it better be bloody good, because right now the misery is becoming unbearable.

It’s not the results that really make me despair, or the fact that we may go a season without European football. It’s the overall lack of tactical awareness and the obvious inability to change formations when things are clearly not working.

Another worry that warrants repetition is spending £65 million on two players we arguably didn’t need. If you think we need Fellaini, I’d love to hear from you! And whilst we all accept Mata is a wonderful player, there were more pressing priorities, and we’re not even letting him do what he does best. Klopp said he cried when he saw how Kagawa was being used at United; I wonder if Mourinho, despite his apparent concerns about Mata’s defensive work-rate, will shed a tear as he watches us waste the Spaniard’s talents too.

Watching Moyes being interviewed, he so often looks like a man who’s just gone three rounds with Mayweather, and that cannot be good for the team and the spirit of the players. He needs to be a lot more upbeat, then maybe the team might just play with the energy required.

Tomorrow night, I pray that Moyes gets us playing a high-pressing, high-tempo game from the first minute to the last. If we sit back, let Arsenal dictate the pace and monopolize the ball, we could be in for a hammering. Let’s hope we’ve properly studied how Liverpool destroyed Arsenal on Saturday, and that we’ll attempt to expose Arsenal’s weaknesses.

I no longer expect us to get top 4. Realistically, we’ll probably finish 7th. I just hope we can play the rest of the season like we’re really the Pride of all Europe, the Cock of the North! The players need to give their best in every game, but they need a complete rethink from the manager and the coaching staff if we’re going to have any hope of seeing some attractive, 21st century football before the season ends.