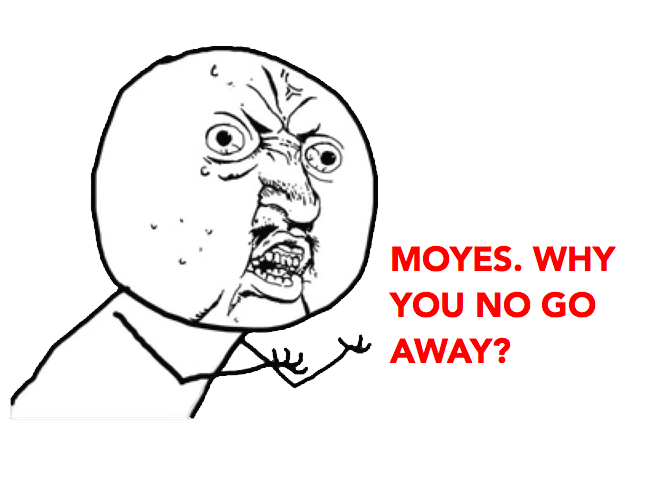 My posts have shifted from concern to anger recently, and I know a lot of what I say isn’t popular. But every word I write is born purely from a passion for my team – a team I have followed for 55 years. United have given me some of the best moments of my life, and of course there have been a fair few lows over the years as well.

My generation of fans remember the post-Busby years all too well, and maybe that’s why I am finding that my contemporaries feel the same as I do – the sooner Moyes is gone, the better health our beloved club will be in. A number of fans – maybe the majority – have never experienced a season like this, so they may have slightly more patience than us old guys.

I have said on numerous occasions: it’s not just the losing, it’s the manner in which we lose. We have a manager sitting in the dug out that seems totally clueless on what to do during a game to maybe change our fortunes. When he speaks, you can feel the negativity oozing out of every word and the room’s eyes collectively glazing over. This atmosphere must be polluting the dressing room.

Watching United this season can only be likened to the dark days post-Busby. We have managed to take just 7 points (from a possible 36) from the clubs in the top 9 positions. In a matter of months, we have become the joke of the football world, especially in the UK, as no one has ever seen a team fall as fast as we have in the past few months.

Yes, I am angry. I have a huge passion for my team and it hurts so much to see the disaster that is unfolding. Noel Gallagher put it brilliantly when he said this week that United tried to fill the biggest boots with the smallest feet. He also said that if the club doesn’t act in May, it will be a long time before United will be back fighting for trophies along with Chelsea, Arsenal, City and Liverpool, and it’s very difficult to disagree with him considering what has happened this season and the past record of our current manager.

Do I want United to win games? Of course I do in my heart – how can I watch us play and be hoping the other team score? That’s never going to happen, but my head says that, for the immediate and long-term future, we are probably better off losing so the Glazer family do what they need to do in May, and replace Moyes with a proven TOP manager such as Klopp, Simeone or Van Gaal. Personally, I would love to see Klopp or Simeone managing our club next season. They are both very different to Sir Alex, and thankfully very different to David Moyes.

Obviously, we won’t be in the Champions League, so to have any chance of attracting top talent without paying double the going rate, we will need a top, charismatic manager who players want to play for. David Moyes most definitely does not fit the bill. Whatever the Glazers have to pay him off, they will more than save in transfer fees.

I also want to clarify that I absolutely have the utmost respect and basically love of Ferguson. As a fan, I am so grateful for everything he has done at United these past 26 years. He is an amazing man and a total one off. Of course, like every human being, he has made mistakes – he bought some fantastic players, often for next to nothing. Then again, he also bought some dodgy ones. I don’t believe Sir Alex could ever have imagined what would happen under Moyes, and I don’t believe for one second that he would have appointed him had he been able to see the future. I think football has moved on – Fergie ran the club with an iron fist; he was a strict father figure to the players, but now you see the top clubs in Europe are managed by a new breed of manager, predominantly in their 40s with a completely different style to what proved to be so successful for Sir Alex. That is the only reason why Sir Alex should no longer be so influential, along with Sir Bobby in the boardroom, as times have changed.

Last August, Moyes started off very negatively, complaining about our tough fixtures. It’s been negative ever since, as has the football on the pitch. We are in 7th place, with the same number of points after 29 games that Everton had last season, scoring the same amount of goals! I don’t believe any United fan could have possibly imagined it going so wrong so fast. In my opinion, whatever happens the next 2 months, Moyes has to go.