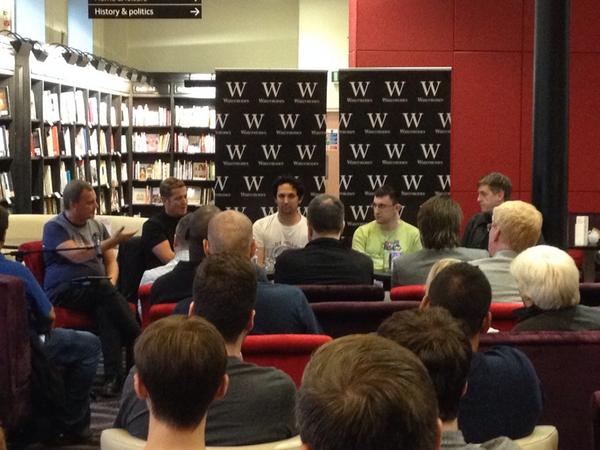 There was a top panel of speakers – both Reds and Blues – with some outstanding insights on the game and, specifically, on Manchester’s two most established clubs.

The event was chaired by Gary James (author of Manchester: A Football History), and featured two speakers from each of the Manchester camps.

In the red corner were Simon Wadsworth (the great nephew of Don Davies, the Manchester Guardian reporter who wrote under the pen-name “Old International” and who tragically perished in the Munich Air Crash in 1958), and Daniel Harris (Guardian football writer, Class of 92 consultant and author of some great books, soon to include 20 Goals That Shaped Football).

In the blue corner were David Mooney (Blue Moon podcast) and Simon Mullock (Mirror reporter who had some run-ins with Fergie over the years and spent time with LVG this summer).

Here are my highlights from An Evening of Manchester Football. It’s a mixture of direct quotes and paraphrasing, so apologies to any* of the speakers if I’ve grossly misrepresented you (*City fans excepted).

What has had the bigger legacy: Man Utd’s Treble or Paul Dickov’s goal in the 1999 Second Division play-off Final?

SM: The Treble “capped the legend that is Man Utd.” Dickov’s play-off goal “saved the club.”

What makes a great captain?

SW: “The best captains represent their managers… After Gary Neville, we went to Vidic, who was a great player, but not a great captain. Now we’ve got nobody.” (SW wasn’t impressed with Rooney’s repeated attempts to leave, but United have broader issues with passion, commitment and leadership).

“If Robson was playing, we felt safe. It was pretty much the same with Roy… He won the game in the tunnel against Arsenal in 2005.”

SM: “City have a team for of leaders. United don’t… However, Tevez was a poor choice as captain, and many City fans were tinged with regret that it was Tevez who scored the winning goal in the 2011 FA Cup final, rather than someone like Kompany.”

DH: “The thing that’s most significant in all great United captains is leading from by example… Roy Keane was 8/10 every week… Other players need to see someone leading from the front.”

“Fergie did everything possible to get Rooney out of the door… It will be interesting to see if LVG perseveres with him.”

And who was the ultimate United captain? “Bryan Robson!”

Transfers: What do you think of this summer’s business?

But the money was seemingly available before LVG took over…

DH: “Moyes looked like he thought we were signing Bale last season.”

SW: “City did their business nice and quietly this summer, and got contracts sewn up for their existing players.”

As for United splashing the cash on so-called mercenaries? “The best players play their best football for the biggest clubs.”

DH: “By the time the team gels, it might me too late to mount a challenge this season… But it’s bullshit that United don’t need players like Di Maria and Falcao. We need wit and imagination, and you don’t build a team in one window. We may still need defenders, but if great players become available, you take that opportunity.”

“I’m sad that Welbeck left – Hughes was the last time we produced a striker. But Wilson… he is going to be a star.”

SW: “Was Fergie really a genius? We should have strengthened when Ronaldo left. Maybe, in his last five years, Fergie wasn’t as great as some people say.”

DM: “I’m cynical about what’s going on with the youth academy at City. Our youth players are simply assets, either to be promoted to the senior team, or to be sold to someone like Huddersfield.”

“City have spent a lot of money badly, but now things are much better… The worst thing United could do was saying they had a load of money to spend.”

SM: “David Gill went about his business quietly and didn’t tell you anything until the deal was done.”

DH: “The transfer market is simple. Pay what the selling club asks. That’s how you buy the best players. It’s not about negotiating hard and showing you’re some badass businessman.” (A la Daniel Levy, who bragged about selling Berbs whilst his team slid into decline).

SW: “I also think the corporate sponsorships are driven by the Glazers, not by Woodward.”

The Owners: What do you think about the ownership of the clubs?

DM: “Where do we draw the moral line? …The money is good for Manchester.”

DH: “It’s impossible for me to get over the moral issue… Who would have thought the Glazers would end up being the best of a bad bunch? They’re cowboys, but not as bad as Abramovic or Abu Dhabi.

“On the other hand, the rivalry with City is better than ever, and without the new money, the Premier League would have been far less competitive in recent years.”

“Now we’re at the beginning of an upswing in the quality of English teams. United had to spend big this season.”

SW: “I think City’s owners are doing a fantastic job. If an individual wants to put all his money into a club, that’s not accepted, but if someone wants to suck all the money out, that’s OK. Why?”

DH: “I hate the Glazers. I hate Abu Dhabi. I hate Abramovic.”

“FFP means no-one else can get into the established elite group of clubs… There should be a global cap on transfer spend, as well as number of players sold in a window.”

GJ: “It’s disappointing that Fergie didn’t take a stand against the Glazers.”

DH: “United were whack in 2005. The Glazers needed Fergie, but maybe he needed them too.”

DH: “Ultimately, you need to divorce the people who own your club from your experience of supporting your team… The government haven’t understood the special place club’s have in people’s hearts… The continuity through the generations and the connection with the community are what make football special.”

What about all the “death of United’s youth philosophy” nonsense?

DH: “There’s always been a mix at United of expensive signings, canny signing and youth players. Van Gaal has already given debuts to Blackett, Wilson etc.”

“There is definitely something very special about players coming through the ranks, especially if they happen to be local, like the Class of 92. It’s a different kind of pleasure watching Ronaldo and watching Scholes.”

Things to look forward to

SW: “Manchester is the centre of the football universe, and we’re still producing great players… Look out for James Wilson.”

DH: “The United/City rivalry will only continue, and when things go well, it just makes the victories even sweeter.”

SM: “LVG seems to want to buy into Mancunian life. He has a good sense of humour, and knows what he’s doing… He will be a success at United.”