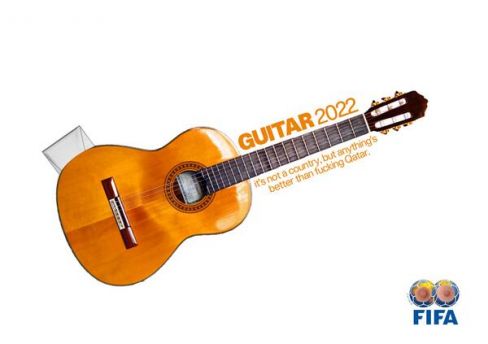 We’re just 2 days away from the 2014 World Cup in Brazil. There have been major protests across Brazil in the build-up to the tournament, and the mood about hosting the tournament remains sour, but despite the major problems with poverty and social inequality in Brazil, the basic concept of holding a World Cup there makes a reasonable amount of sense.

A lot more sense, than, say, handing the 2022 World Cup to Qatar – a country baked in brutal 50C summer heat, known for its institutional homophobia and dodgy human rights record. Qatar, the country using migrant slave labour to build stadia, with warnings that 4,000 workers could die before the 2022 tournament begins. The revelation that corruption surrounding the bid is now being investigated is about as surprising as England exiting an international tournament on penalties.

In light of the Qatar controversy, the Drum and Paddy Power launched a competition inviting designers to create alternative 2022 World Cup posters, imagining other potential host destinations, both within and beyond Earth’s corruption-infested atmosphere. You can see all of them (and vote for your favourite) here, but I’ve included a few of my personal favourites below…