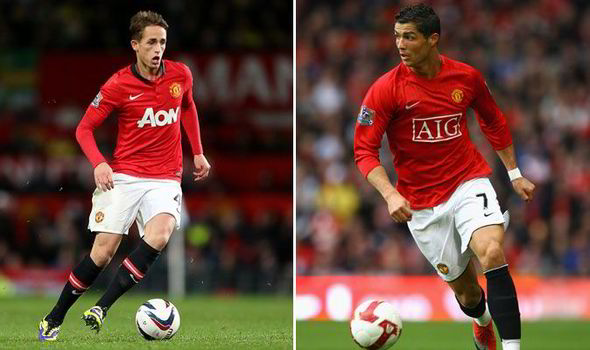 Although it may seem futile and utterly laughable to be comparing our young 18 year old starlet to the recent Ballon d’Or winner, it’s interesting to compare and contrast their opening seasons as budding talents at Manchester United.

Ronaldo’s United debut against Bolton Wanderers in 2005 was one of those ‘where were you when…?’ moments. Everybody recalls where they were when Ronaldo burst onto the scene; every man and his dog were waxing lyrical, and predicting huge things for this spindly Portuguese kid with fancy footwork, yet I don’t think anyone could have predicted that would become the world’s most expensive player.

This season, with the emergence of Januzaj, people have been tentative to draw comparisons to Ronaldo. Although it is impossible to say with any sort of certainty the level that Januzaj could reach, what is clear is that, considering his age and lack of experience, he has been a revelation this season.

Although it looks as though Januzaj will develop into a different type of player to Ronaldo, his all round game, end product, and overall contribution to the matches that he has been part of this season has definitely been on a par with, if not better than, Ronaldo in his opening year.

If you look at both of their technical skills and physical attributes, then Ronaldo is the clear winner. But Januzaj has an astounding understanding of the game, on a different level to almost any player as young as inexperienced as he is. One could easily think, if it was not for his almost pre-pubescent appearance, that he had been commanding the midfield for years. This makes it incredibly easy to watch Adnan glide across the Old Trafford turf as if it was his second home. Combined with his incredible balance and skill, he is a pleasure to watch, and dare I say, a potential superstar in the making.

These distinctions mean that he has something that a lot of young players do not have – a certain level of consistency. This makes him easy to watch, whereas Ronaldo could be incredibly frustrating in the early days. Instead of getting the ball into the box, he would attempt a fifth, sixth, and then seventh step-over.

Will Janujaz reach the level that Ronaldo is currently at? The answer is probably not, but that is not to say he will not be an absolute fans’ favourite, and a player who can, without doubt, challenge for the illustrious Ballon d’Or in the not so distant future.

He certainly seems to be more rounded player than Ronaldo was at the age of 18, but does he have ‘it’? Only time will tell…