Manchester United were able to pick themselves up with a resounding two nil victory against Burnley after conceding back to back defeats in the Premier League. While the victory hasn’t taken them very far in terms of their position on the Premier League log, it has helped quelled rife rumours of Jose Mourinho’s sack from Old Trafford.

Fans would be expecting United to win this game with a wide score line, but Watford are one of the strongest teams at this stage of the EPL. Watford will be another tough challenge for the Red Devils as they are one of the three teams with a 100 percent record. Having won all the four matches played so far, Watford, together with Liverpool and Chelsea, are spotless.

The Old Trafford outfit will be looking to bag in all three points to avoid sinking down the pecking order.

Luke Shaw will be missing out of this match having suffered a knock during the international break with England against Spain. Phil Jones will also be missing the match due to hamstring problem suffered against Burnley.

Marouane Fellaini will be available as Marcus Rashford misses the next three domestic games following his red cad against Burnley.

We take a look at United probable starting eleven against Watford.

Sergio Romero is in contention for his very first game of the season, but De Gea will be expected to man in-between the sticks for the Red Devils.

Luke Shaw’s injury means that Portuguese manager Jose Mourinho will be looking toward several options at left back including Ashley Young and Darmian. Young is expected to interest Mourinho more to earn a start. Valencia should play at right back, while Smalling may be pairing with Lindelof.

At this point, it is not clear what Mourinho’s preferred formation will be for this match. But, he has deployed the 4-3-3 a lot in his tenure as manager. Consequently, we should be seeing three midfielders against Watford. Paul Pogba and Fred seem like an easy pick with Fellaini or Matic partnering the duo.

Lukaku is untouchable upfront. Lingard has shown promises this season while Sanchez slots into the line.

Watford defeated Tottenham Hotspur in their previous match, coming from behind to stage a 2-1 win. This won’t be a walk in the park for Manchester United either. 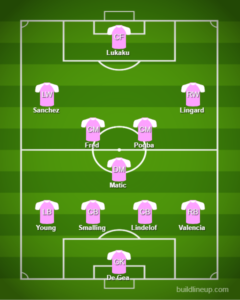